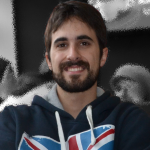 Davide Tavernini received the master’s degree in Mechanical engineering in 2010, from the University of Padova, Italy.
Since 2011, he has been working towards the Ph.D. in the modeling of two and four-wheeled vehicles and in the optimal control theory applied to multibody systems in particular vehicles.
In 2012 he worked as a visiting researcher at Brunel and Cranfield University in the UK. During this period of five months he has been involved in the modeling of rally cars and simulations with the aim of mimicking typical rally aggressive maneuvers.