Quantitative assessment of manoeuvrability for a 750 cc street motorcycle

The aim of this work is to calculate the coefficient of handling, the Lane Change Roll Index, even called MDRG Index, using the software Matlab. The motorcycle we used is an Aprilia Dorsoduro 750 cc.

The principal aim of this work is to write a program that reads the data from a data logger and gives automatically a value of the MDRG Index.

In a second way the program must be able to create a figure (divided in three parts) with the mean speed, the roll rate and the steering torque for each run of every tester. Those data, combined in an unique and simple math expression, give us the MDRG Index for every data set. At the end, the program gives us an unique value of the MDRG Index.

This work is part of the project developed by the Motorcycle Dynamics Research Group for the European project based on the motorcycle safety, called 2BESABE.

From the figure below we can see that a motorcycle has an own coordinate system. 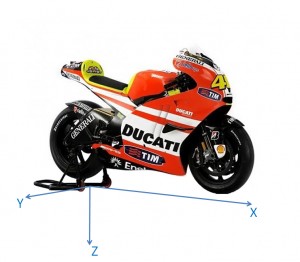 Than the motion around each axis takes a particular name:

As we can see from the picture below, the single LC manoeuvre consists of three distinct phases.

The ‘LC roll index’ offers a complete description of the vehicle’s behaviour in LC entry:

where the subscript p−p indicates the peak-to-peak values.
In the case of the LC Roll index, both the first and the second peaks of the torque and roll rate signals are considered. This serves a number of benefits. First, this metric captures a more complete view of the manoeuvre entry. The initial steering torque results in a roll rate, eventually peaks and changes direction. A second torque peak occurs representing the rider’s steering into the turn, rolling the bike in the opposite direction. With this metric, we also consider the second peak in roll rate which occurs, near zero roll angle, at the approximately halfway point in the manoeuvre. Hence, we have a more complete description of the input/output relationship for a successful entry to the LC.

The data logger, shown in the figure below, is an hardware component that allows to organize and manage the instrumentation installed on the motorcycle. Is so possible records all the data coming from the sensors installed and from the inertial platform.

The Data Logger, as well as the inertial platform, has been installed below the saddle, this positioning protect the instrumentation and at the same time gives easy access to it.

The dynamics of the motorcycle is based on the acceleration, on the angular velocity with which it is subjected. Dyna 3 is essential for the measurement of accelerations and speeds. Dyna 3 consists of three accelerometers and three gyro-meter, with reference to the SAE convention. The acquired measurements are:

Directly connected to the inertial platform (Dyna3) there is the GPS system that through a system of 24 satellites and the antenna installed on the motorcycle, permit to reconstruct the trajectory travelled. This information is necessary to associate the recorded data to the manoeuvres done.

The GPS antenna is positioned behind the saddle, in order to have a clear sky and to protect the antenna from vibrations and heating.

The longitudinal speed of the motorbike is given by two inductive speed sensors, one for the front wheel and one for the rear wheel. The sensor reacts to crossing metal parts (e.g. screws or parts of the brake disc), the induction signals are measured and counted. The original wheels are provided with phonic wheels for the evaluation of the angular velocity for the slip check that control the ABS system of the motorbike.

Since there are not steering torque sensor available on the market, a special device has been designed and built specifically for the Aprilia Dorsoduro.

Sensor specifications require that the steering torque sensor substitutes the original parts of the motorcycle, without changing handlebar ergonomics. Moreover, the sensor should be sensible to rider torque of few Nm (typical values in steady cornering) up to 100 Nm and more (typical values in fast lane change or emergencies manoeuvres).

Knowledge of the steering angle during the manoeuvres it’s a very important information for calculating, for example, indices which define the feature over steer or under steer of the motorcycle.

In the real world have been asked at participants to ride along a pre-defined, closed track, and to carry out an obstacle avoidance manoeuvre. See the video by clicking on the image below.

Tests have been carried out in a private closed track in Padova. The characteristics of the closed park are shown in the figure below. For safety reasons, the obstacle has been reproduced by means of a traffic light that randomly indicated in which direction the rider had to swerve. According to test protocol, the rider starts to ride on straight and crosses the wireless photocell situated at 30 meters (length) from the indicator light, this one switch on the left or right light randomly. In this way the rider doesn’t know which manoeuvre will perform. After the light signal the rider has to keep a constant speed, of course the difficulty of the manoeuvre increases with the speed. To consider valid the test the rider must perform the manoeuvre inside the cones (width of 3 meters) that delimits the test track.

From the data collect during the test is possible calculate the Lane Change Roll Index that consider the action of the rider on motorbike by the steering torque and the reaction of the bike by the roll rate, as explained below.

In some cases we can use another Matlab script that shows us the trajectory of the path using the latitude and longitude data.

We can notice that there are some correspondences between the trajectory of the path and the roll rate / steering torque graphic:

If the automotive safety is so developed, in the case of the motorcycle the work is only at the beginning. So it is important to evolve the research of the safety even in the motorcycle. if a motorcycle is most manoeuvrable than another motorcycle we can drive it with less effort and in case of danger we have most possibilities to manage it in safety.

Here you can download a part of my thesis in pdf format. Notice the some parts have been deleted.